In the heart of the Lake Constance district

In the heart of the Lake Constance district

Markdorf is a lively small town at the foot of the Gehrenberg with around 14,000 inhabitants, a well-stocked retail trade, active associations and numerous sights and part of the holiday landscape Gehrenberg-Bodensee. The Untertor, the Obertor and the Hexenturm with the striking Staffelgiebel are characteristic landmarks of the city. A must for every visitor is a stroll through the historic old town, which is marked by the prince-bishops of Constance and to which we owe the "Bischofschloss", for example.

Markdorf is conveniently located and connected to public transport by bus and train, making it the ideal holiday destination for a relaxing holiday in the Lake Constance region.

Panoramic view over the Alps

Flowers wherever you look. In spring tulips and daffodils, in summer a colourful mixture of the most beautiful flowers from Lake Constance. Besides half-timbered houses, fountains and other water sources, historical buildings and inviting squares. The view from the "Großherzog-Friedrich-Warte", the 30 m high observation tower on the Gehrenberg (754 m), is simply unique. When the weather is fine, you have a unique panoramic view over the Swiss and Austrian Alps as far as the Bavarian Alps with the Zugspitze massif.

The historic old town is home to numerous gems, such as the protective chapel in the church of St. Nicholas, the hospital with the 15th century Mauritius chapel or the former residential and working quarter of the Markdorf winegrowers and farmers - the "Auen". Stone witnesses of Markdorf's history and stories can be experienced up close during a historical city tour or an evening tour with the night watchman. You can also visit the Hexenturm (witch's tower), once a prison for citizens, or the craftsmen's museum. An extensive range of events ensures an entertaining stay.

Cosy small shops, crafts and a modern shopping centre characterise the economic part of the city. Every Thursday morning there is a weekly market in Markdorf with a wide range of regional products.

Markdorf is characterised by the harmonious interplay of good infrastructure, history and customs, as well as the fruit-growing and wine-growing environment. Unlimited cycling and hiking possibilities are offered from the 30 m high tower on the Gehrenberg (754 m a.s.l.) to the Bodensee trail in the Drumlin and Niedermoor landscape of the Hepbacher-Leimbacher Ried.

The GuckinsLand tour starts in the Markdorf district of Möggenweiler at the Vogelsang car park. After just a few metres the hiker passes a building of a very special kind: a historic water reservoir built in 1903/1904.

The route continues with an ascent along forest paths and paths until the 30-metre-high Gehrenberg Tower is soon reached. It was erected in 1903 as the "Großherzog-Friedrich-Warte" (Grand Duke Friedrich's Control Room) and still inspires today with a fantastic view over Lake Constance, which in clear weather reaches as far as the Bavarian, Austrian and Swiss Alpine peaks.

Via the "slide" to the swing and on through woods and courtyards - Shortly after the Gehrenberg Tower you reach one of the most spectacular attractions in the Lake Constance region: since the great earthquake on 16 November 1911, the so-called "slide" has run along the Fuchsbühls, an almost 30-metre vertical abyss reaching down into the depths. Although the unsecured edge should be enjoyed with a little caution, it offers a magnificent view of Markdorf and Lake Constance.

We continue through the forest to the Linzgaublick with beautiful views to the west and a generously dimensioned reclining swing for those who want to enrich their hiking trip with particularly relaxing moments. And the next attraction follows on your heels: just one kilometre further on, a perfectly placed rest area invites you to take a break for refreshment - including a wide view of the Deggenhausertal valley to the north-west.

On its second half, the GuckinsLand circuit leads mainly through picturesque forests, across numerous clearings, a wooden bridge, another resting place and sometimes directly through solitary farmsteads. Always at your side: fascinating views deep into the hinterland and to the Alps.

Feel like a holiday at Lake Constance? We are sure you will find your right accommodation here. 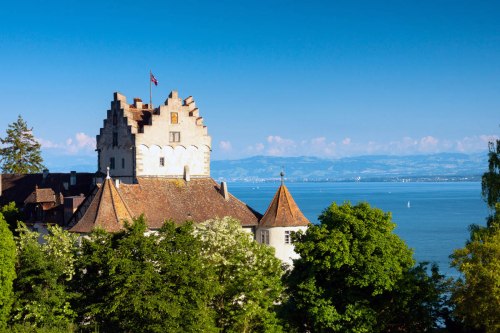 The oldest inhabited fortress in Germany