Stockach
The gateway to Bodensee

The question from where the name Stockach is known is usually answered briefly. "From television, of course. This is no wonder. After all, the community of 17,000 inhabitants on the north-west shore of Lake Constance is the stronghold of the Alemannic carnival. Every year, in each case on the so-called dirty Thursday a prominent German politician is quoted before the "Hohes Grobgünstige Narrengericht" (high carnival court). And just as regularly the negotiation is to be pursued country widely in the evening program. Thus Stockach comes into German living rooms.

The right to give a politician a proper opinion according to all the rules of legal art dates back to 1351, when the court jester Kuony von Stockach was granted a corresponding privilege by the Habsburg Duke Albrecht. Actually, the matter had more to do with the attempt to approach the status of a free imperial city. This never happened, however, and so the bourgeois claim turned into foolish law in the course of the centuries.

Of course, the Stockacher Fasnacht takes place so early in the year that not every holidaymaker feels attracted to the foggy shores of Lake Constance. Although visitors from all over Germany come to Stockach for this carnival top event, even die-hard fools have to admit that a sunny lake conveys far more holiday feeling.

However, this holiday feeling arises at the latest when the trees blossom in late April, when the blue of the water, the fresh green of the meadows and the white of the trees create a magnificent play of colours. And it goes on until late autumn when the red of the leaves in the vineyards on the lakeshore mixes with the first early fog to create a magical landscape.

Stockach is so conveniently located that all these emotional moments can be easily experienced and reached. Inquiries about how to get there are gladly answered in the Stockach Tourist Information with the sentence: "Always head south on the A 98 and when this is over, you are in Stockach".

The airport Friedrichshafen is not far away and Stockach also has a half hour train connection. From the historic old town down to the lake, it is four kilometres, which can be reached on foot via a well-signposted network of paths. Cyclists are offered two cyclepath alternatives in the direction of the water. By the way: the Jakobsweg (Way of St. James) with a completely prepared route also leads through Stockach.

If you want to visit the island of Mainau, the Säntis, the Rhine Falls, Meersburg or the Bregenz Festival, Stockach is a good starting point for all holiday pleasures. Zurich's Bahnhofstrasse is just over an hour away by motorway.

If you want to spend a day without Lake Constance, the volcanic landscape of Hegau, the rocks of the Danube Valley or the forests of the Black Forest offer wonderful alternatives, all of which are easy to experience or hike from Stockach.

Stockach itself offers peace and relaxation. Worth seeing are the Heidenhöhlen (Heath Caves) above the Zizenhausen district, which can be excellently combined with a hike on one of Stockach's Quellerlebniswege. 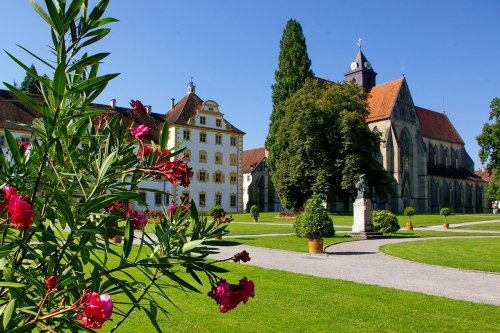 Old beauty in a new light