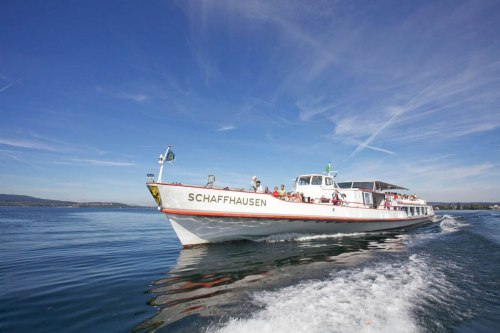 Beautiful views - since more than 150 years 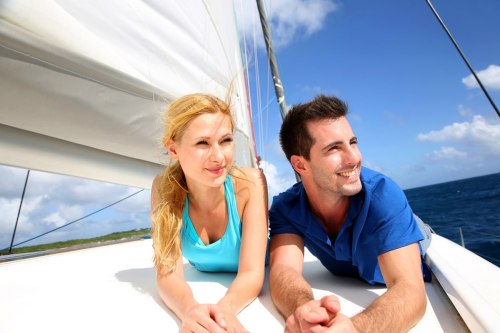 The boat exchange for Lake Constance 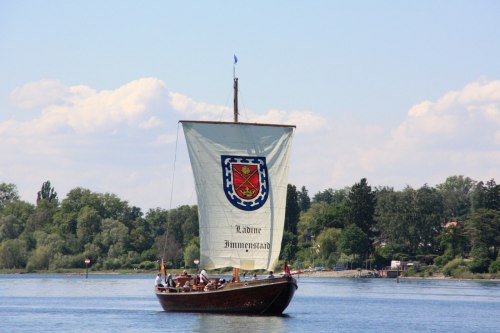 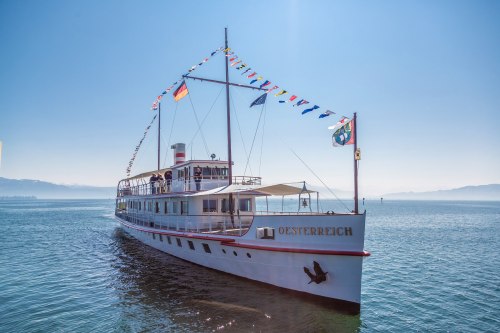 On board the dream ships Hohentwiel and Oesterreich 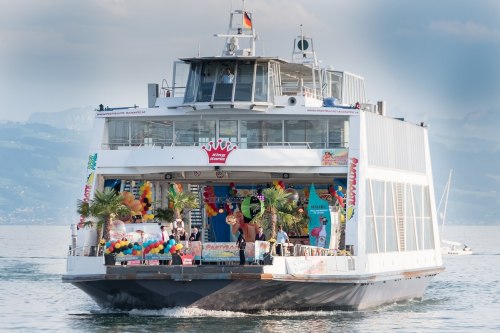 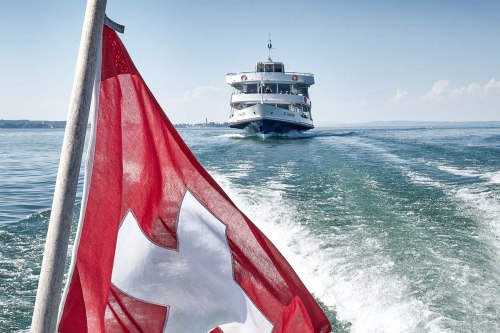 On the way in paradise - get in and relax 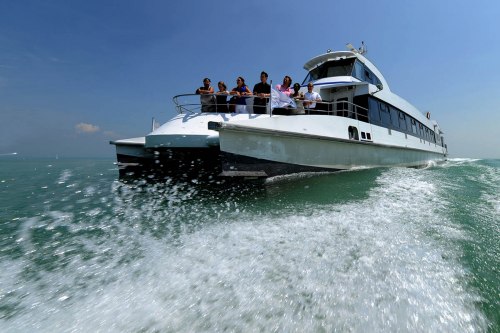 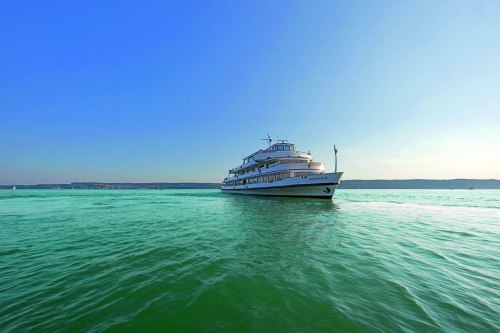 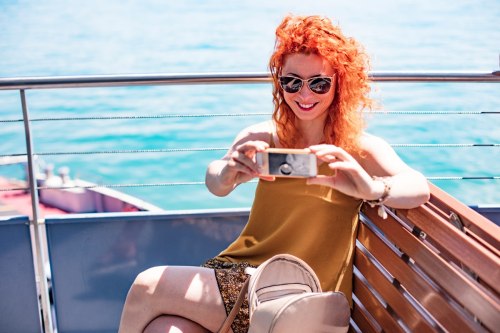 A short vacation on the ferry 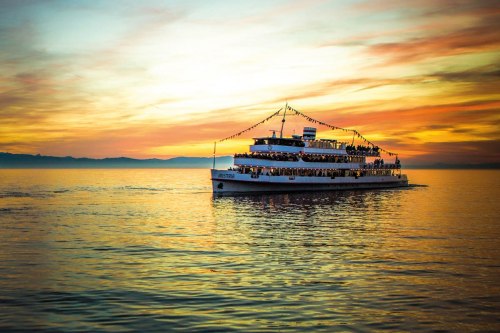 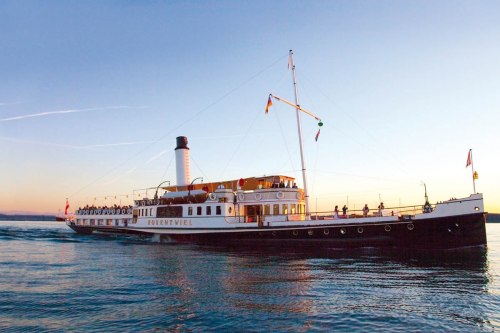 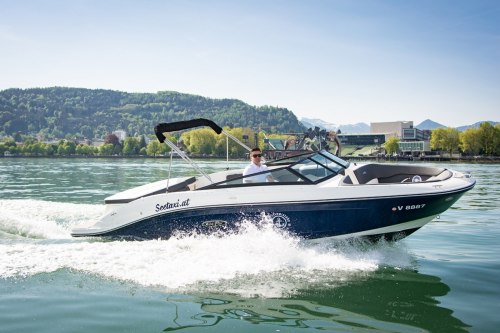 Enjoy the gentle breeze and the magnificent view

On the list of things that every holidaymaker on Lake Constance should do during his stay, first and foremost is a trip by ship. While enjoying the gentle breeze of the lake, one has an unbelievable view of the hills lined with vines on the shores of Lake Constance and the Alps on the side of the Swiss shore. Of course, one would miss such an experience in the train or in the car. Use the ship to travel to your holiday destination on Lake Constance or take a trip by ship during your holiday and enjoy the unique atmosphere on board.

On Lake Constance there is a suitable ship for every occasion: excursion boats take you to the most important tourist spots on Lake Constance, the modern catamaran brings holidaymakers from Friedrichshafen to Constance and back in just 50 minutes and you can even take their car with you on the ferries between Friedrichshafen-Romanshorn and Meersburg-Konstanz. The ship connections on Lake Constance are well developed by the numerous providers. The timetable of the ships is adapted to the summer and winter seasons but offers a good connection all year round.

The history of Lake Constance shipping began in the middle of the 19th century: in 1842 the first steamboat "Wilhelm" was put into service, which operated between Friedrichshafen and Rorschach in Switzerland and carried passengers and goods. After the Friedrichshafen and Konstanz steamboat companies were founded, more and more ships were operating on Lake Constance. Excursions were possible as early as 1860.

From 1920 onwards, technical developments led to the development of faster, motorised ships that travelled between the towns on Lake Constance. During Second World War, shipping operations on Lake Constance were discontinued, and only in 1948, after the fleet was confiscated by the French, did the ships resume service. After the founding of the largest shipping companies BSB, URh and Vorarlberg Lines, today Lake Constance has the largest inland waterway fleet in Europe.

The ships of the Lake Constance shipping companies operate between almost all cities on Lake Constance, trips to Switzerland and Austria are possible. Since the route network is very extensive, it is advisable to take a look in advance at the various fairways of the ships.

The Lake Constance shipping companies offer combined tickets for the most important sights on Lake Constance: Tickets for the island of Mainau, the Pfänderbahn in Bregenz, Sea Life in Constance, the Lake Dwelling Museum Unteruhldingen, the Zeppelin Museum and much more are already included in the fare. BSB GmbH has listed the exact conditions of the combination ticket offers for its passengers on its homepage.

In the online shop of BSB GmbH, it is possible to book adventure and event trips, order vouchers and buy combination tickets. You can also order free brochures on BSB GmbH's excursion destinations and timetables.

In addition, event trips to various destinations are undertaken regularly. The tickets for these trips are also available in the online shop of BSB GmbH. You can find out about the exact dates of these adventure trips on the Bodensee Schiffsbetriebe website.

Here you will also find the exact prices and discounts for trips with the ships listed.

The convenient and comfortable journey from Constance to Friedrichshafen and back over the water. Every hour throughout the year, the sleek ships "Constanze", "Fridolin" and "Ferdinand" depart two minutes after the hour and bring passengers across Lake Constance in just 52 minutes.

A one-way trip costs around ten euros. There are also some discounts that make the ticket even cheaper. You can buy it as a return ticket, as a multiple-trip ticket, for small or large groups or as a monthly ticket. There is even a subscription for commuters. Also other discounts are possible. Here you will find the exact fares.

There are combined tickets available for holidaymakers and locals to popular destinations by the lake. You can also combine the Dornier Museum, the Zeppelin Shipyard and the Rosgarten Museum with a trip on the catamarans (combined offers). This makes for a successful day trip that satisfies everyone - especially lake lovers, of course.

With the inexpensive Kat-Card, which is valid for one year, the one-way trip is reduced to five euros. The crossing over Lake Constance is twice as much fun.

You can find the fares for the scheduled boats on the Vorarlberg Lines website.

It is possible to buy combined tickets to the most important excursion destinations on Lake Constance. The Vorarlberg Lines offer the following services: Combined tickets for Mainau Island, the Zeppelin Museum, Sea Life in Constance, the Lake Dwelling Museum in Unteruhldingen, Meersburg Castle and Unteruhldingen Reptile House.

The Vorarlberg Lines also offer many different Lake Constance cruises on various themes (crime novel dinner, fondue ship, trip to the Christmas market from Lindau to Bregenz, ...). It is possible to book them online.

The Schweizer Schifffahrtsgesellschaft operates on the Untersee of Lake Constance and the Rhine, between the Rhine Falls near Schaffhausen and Kreuzlingen. Between the two locations, the cities of Stein am Rhein, the island of Reichenau and Constance are served.

Tickets are available on board. The URh has listed the exact prices and discounts for boat trips for you on its homepage.

The URh also offers event cruises. Brunch and raclette trips with Swiss cheese are offered, which also take place regularly in winter. You can register on the website of the URh, where you can also find more information about the event cruises.

On 11 January 1913 the Hohentwiel was launched as the seventh steamboat of the Königlich Württembergischen Staatsbahnen. Named after the fortress of the same name and the volcanic cone Hohentwiel near Singen, from May 1913 the half saloon steamer operated mainly the courses in Lake Constance longitudinal traffic from its home port Friedrichshafen.

The ferry connects Konstanz and Meersburg several times per hour. Excursionists and commuters can cross Lake Constance by car, bicycle, on foot or by bus.